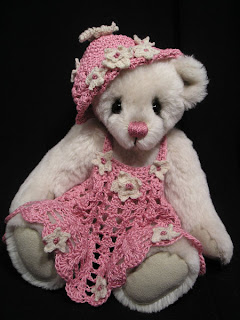 I was delighted that Summer the bear was successful gained 2nd prize at the British Bear Artist Awards in category 3. We were very lucky because I left her BEHIND AT HOME!!! We traveled from Yorkshire by coach leaving our car at home in the drive as it is an oldish car and also Alan does not like to drive such a long way. I had a small holdall on my knee with the competition bears in. We had traveled around 50 miles and I was thinking I had best not squash them and began to think about where they were placed in the holdall. I could not for the life of me picture where summer was placed in that bag and worriedly unzipped it to look. As I suspected, she was not there and I realised I had left her in the glass cabinet at home. I had a check list too and had marked "Nominated bears" as packed, I think I spent so long packing up the "Daisy Days" one in 3 separate boxes I must have thought I had finished.

Oh I was so upset, we were way past Leeds and usually the coach goes straight to London after Leeds, my lovely hubby offered to get me to Brighton in the hotel and go all the way back home for her. I would not allow this and tearily accepted the fact that I would only have the two nominations. But low and behold, 20 minutes later, the Coach was pulling up at Wakefield coach station, not sure why, but Alan quickly jumped up and pulled me with him, we got off and asked the driver if we could have our big case from underneath as we had to go back home for something vital. The driver was really nice and gave us the case and left us stranded in the bus station.

We then decided to get the public transport bus back home as it was too far for a taxi. I had the idea to ring up my Mum who very kindly went to our house, got the bear from the cabinet and met us at the interchange, it took us over an hour to get there but better than having to go all the way home. We thankfully collected the bear from Mum and went to enquire about the next Coach. They said it would be around an hour and we would have to pay again, so we decided we might as well go by train as it would be faster. So this is what we did and as we we had not planned to travel by train didn't realise what a struggle it is to find space on them for a lot of luggage, the train was megga busy and also we had to battle with the tube station in London with all the luggage, the competion bears, all that we needed for a stand at the show (bears, bags, boxes etc) and our clothes for the weekend. We finally got to Hove at tea time and colapsed in the Hotel until next morning, the day of the awards.

I am so glad we went back, as this is the bear that picked up the 2nd prize!!!! We are laughing about it all now and we had such a lovely day at the Bear Fair it was all very much worth it in the end! 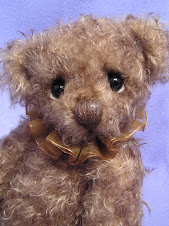